Douglas Brenner won his first trophy in 1964 driving a 1956 Porsche coupe in a Porsche Owners Club time trial on the old road racing course in the parking lot of the Del Mar horse racing track. He was 17 years old and even then was doing his own mechanical work.

In those days SCCA would not issue a competition license to anyone under 21, so Douglas procured a 1958 Porsche Speedster in 1965, and competed in slaloms and time trials throughout California, taking many fast times of day, and beating drivers such as Don Wester, George Follmer, and EFR. Douglas was Porsche Owners Club class N (modified) champion in 1966 and 1967.

Getting his SCCA competition license in 1968 (setting an E production lap record at drivers training), and drove his E production Speedster to an overall win in D and E production SCCA Regional race at Riverside, California. This was his first race. " There was a lot of pressure to win, as my pals Don Devendorf and Elliot Forbes-Robinson had already won their first races that year."

In 1969 Douglas switched to Formula Cars and raced a Lotus 41 FB car. He finished 8th at Castle Rock Colorado in his first professional Continental FB race. He also raced at Sears Point California the first year the track was open.

In 1970, Douglas campaigned a Chevron B15b Formula B car. Winning many National races that year setting lap records at Willow Springs and Phoenix. Competing in the Continental professional series for FB. He qualified 3rd in a field of over forty cars in the first Continental race that year at Riverside (Douglas's second), set the fastest race lap at the Sears Point Continental FB race, and finishing seventh over-all in the series.

Douglas was still doing all his mechanical work and the driving to every race track, competing on most the major tracks in the U.S. and Canada. " We had one engine and after about the second race, Dunlop gave me a set of tires and I ran them for the whole rest of the season, probably six or seven more races. Remember that these were 100 mile races, so with today's compounds you probably would need at least two sets of tires per weekend." Autoweek summed up his season best, writing: " Brenner had much more bad luck than his teammates. But when he had things sorted, he was a contender, finishing in the top six"

Douglas also raced in many SCCA National races in 1970, setting a FB lap record on his way to a win in the rain at Phoenix Raceway Arizona (Old Course) and another FB lap record at Willow Springs California while on his way to finishing one minute twenty seconds ahead of the next car in the race. Douglas went to the SCCA runoffs at Road Atlanta (old course) but blew his only engine in the first qualifying session and drove back home to California. 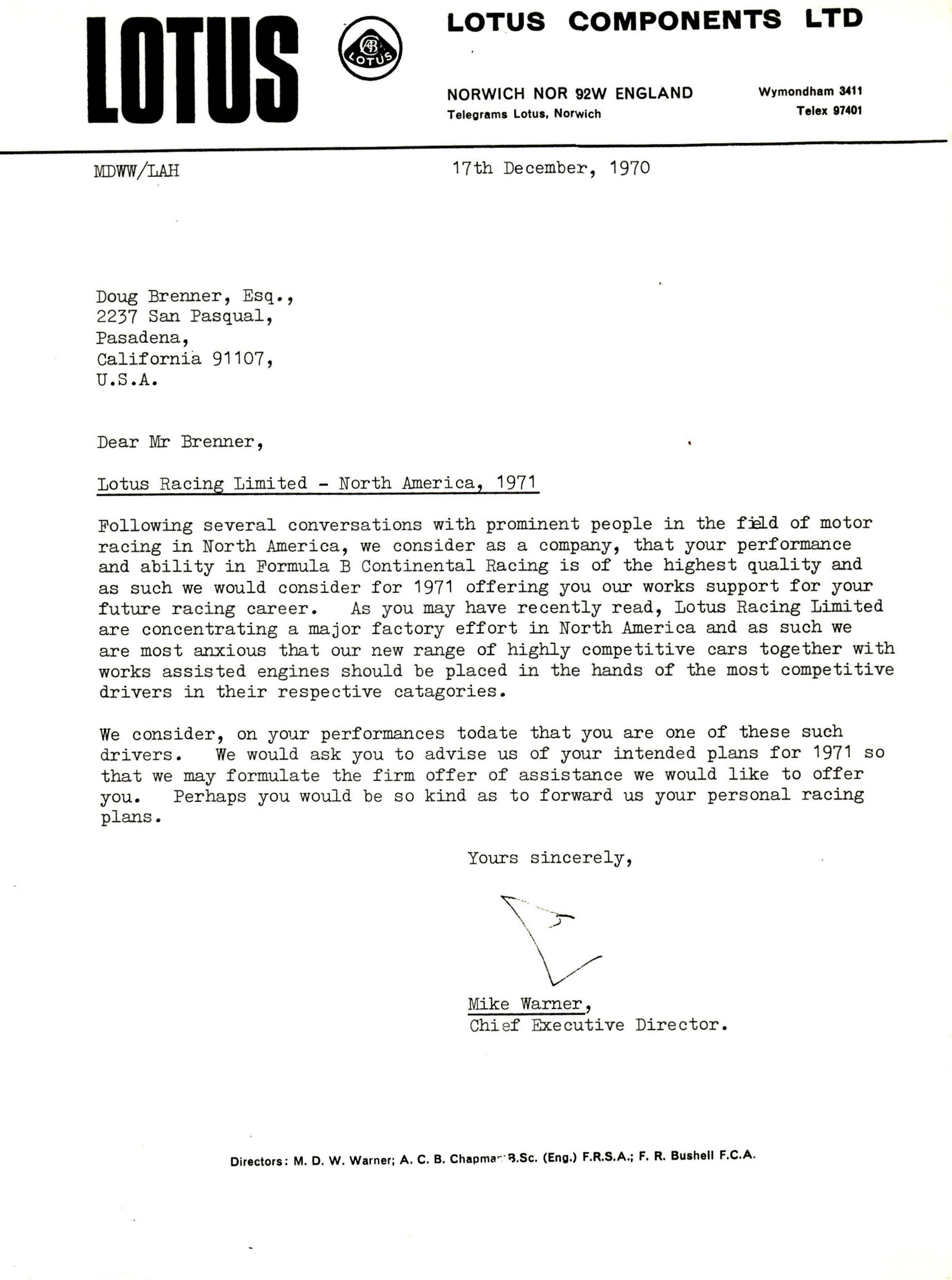 In 1971 he bought one of the last BT29 Brabham brand new but not assembled. Even though the car was new, Brabham had already made a BT35, a monoque BT38, and another monoque BT40. He competed in Nationals and the first three races of the 1971 Continental Series, finishing second at Monterey, Mexico, but having electrical problems in the other two.

At the end of 1971 Douglas ran in the California North/South Runoffs at Laguna Seca California (old course) . He out-qualified the field by over 2 seconds and won the race by a large Margin. You can see the field just coming out of the wonderful old Turn 2 with Douglas in the lead.

n 1972 he was invited, all expenses paid, along with twenty-four other top FB drivers, to compete in a two race series in Bogotá, Columbia, " All we had to do was get the car to the airport in Miami. They loaded it with six other cars on a DC6 and flew us down on a jet. I could see the writing on the wall when I delivered it to the staging area. There were spare cars and motors galore. That was the first time I had seen that. There was also a brand new 722 March." Douglas qualified well but blew the engine in the first few laps of the race.

In 1988 Douglas prepared and drove the Giant Kirby Racing Honda CRX with the late Bob Kirby in the SCCA Escort Endurance Championship Series, spending time at American Hondas Special Projects compound. " It was the hardest car I ever drove!  Front wheel drive is a very different technique and there are people who are very good at driving these cars. Still, it was fun to drive at night (sometimes in the rain) and compete in 24 hour races."

Tracks Douglas Has Raced At (* denotes tracks no longer in existence)

Douglas and his gillnet salmon bowpicker FV WINTER HAWK.  "I fished alone at night working a one third mile (300 Fathoms) long net that was about seventy feet deep.  Along with fish the net would have jellyfish, logs, bushes etc. in it.  During the night I could hear the Killer Whales running down my net.  Not much fun and a tough way to make a living."

In 1986 Douglas procured a Bristol Bay Gillnet Salmon Permit and captained the  FV SIDEKICK II in Bristol Bay, Alaska which is in the Bearing Sea.  " Fishing Bristol Bay was not like the old man and the sea. The fishery only lasted about a month in the summer starting mid June and ending mid July with fishing happening every few days for 12-hour periods.  It was combat fishing, everyone vying for the available fish.  It looked like D-Day.  The tides were huge, averaging over twenty feet in a six hour period.  It was a great experience and very lucrative.  I sold my permit in 1989 for $250,000!"

"I also seined for roe herring for one year in Togiak on the north side of Bristol Bay.  The season started just after the ice melted.  You just took your boat up and waited until the herring showed up.  You had a spotter plane telling you where the fish were and you had to wait until they opened the fishing.  The season that year was one hour long, consisting of two half hour openings.  With our 32' boat we caught 114 metric tons if hearing.  It took the tender all night to pump the fish out of our net.  They had to send a second tender to finish the job.

In the 90s Douglas wrote jokes for Jay Leno on the Tonight show and wrote and fabricated comedy props for comedian Bruce Baum. He also worked as a staff comedy writer and segment producer for Fox TV on the Fox show "Comic Strip Live".   Douglas was also was paid to write and episode of Knight Rider.  In 1994 he ran an RF93 Van Dieman FC car and started Brenner Fabrication, where he prepared, repaired and restored racecars and produced racecar accessories.

In 1997, Douglas went to work at the famed Department of Energy's Lawrence Berkeley National Laboratory as a Mechanical and Electrical Engineering Technician.  He worked  in the Bioinstrumentation Group, making machines for chemical and biological research such as the Protein Chrystallazation Station, and worked on the front end for the Spallation Neutron Source. He also worked with the Environmental Energy Technologies Division which studied the energy efficiency of buildings. One of his responsibilities was running the Duct Tape testing laboratory.